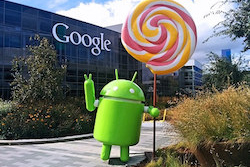 Google said it is looking forward to discussing its Android operating system after being placed under investigation by the European Commission over possible market abuse.

Android is the world’s most popular OS, with a 67.2 percent share in Europe, according to recent figures from Kantar.

Following two complaints and an independent initial investigation itself, the Commission has launched its own probe to focus on three allegations.

The first will concentrate on whether Google has hindered the development of apps by requiring or incentivising device makers to pre-install Google’s own apps and services.

The second is whether the digital company is stopping others from developing and marketing forked versions of Android. One example of such a version is the OS on the Amazon Kindle Fire.

The final allegation is whether Google is damaging access to applications by bundling its own applications and services together on Android devices.

The OS investigation will be separate to an European Commission probe into Google’s search activities.

In a response posted on Google’s blog, Hiroshi Lockheimer, VO of Engineering for Android, said the OS had spurred competition and choice for smartphone consumers.

He claimed its app distribution agreements allow manufacturers to produce devices that compete with Apple and Microsoft smartphones that come preloaded with specific apps.

Further, he said there were far fewer preloaded Google apps on Android phones, compared to Apple apps on its iPhone.

“It’s not just Google that has benefited from Android’s success,” Lockheimer commented. “The Android model has let manufacturers compete on their unique innovations. Developers can reach huge audiences and build strong businesses. And consumers now have unprecedented choice at ever-lower prices.

“We look forward to discussing these issues in more detail with the European Commission over the months ahead.”