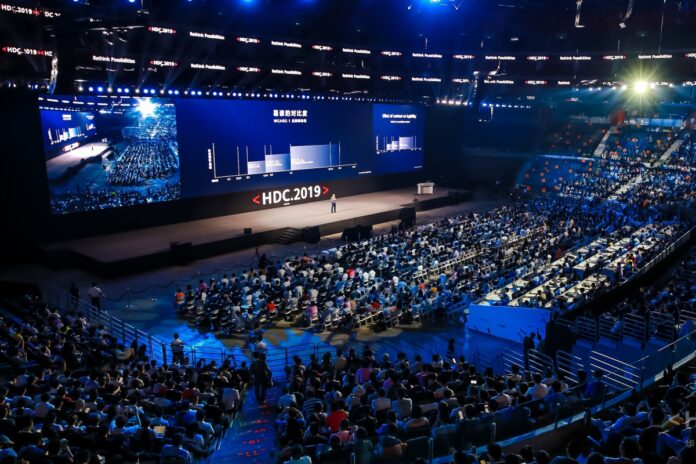 Amid escalating Sino-US trade tensions, Huawei moves towards self-sufficiency, launching its own operating system (OS) and plans for a $1.4 billion R&D facility in Shanghai.

At its developer conference today, Huawei launched Harmony OS , the first OS for devices with a distributed architecture.

Richard Yu, CEO of Huawei’s Consumer Business Group, said the OS is “completely different” from Google’s Android and Apple’s iOS. He said, “It is a microkernel-based, distributed OS that delivers a smooth experience across all scenarios. It has trustworthy and secure architecture, and it supports seamless collaboration across devices. You can develop your apps once, then flexibly deploy them across a range of different devices.”

A report in the South China Morning Post says that within Huawei, employees are referring to the company’s latest strategies as “Battle Mode”.

Initially, HarmonyOS will be used for smart devices like smart watches, smart screens, in-vehicle systems and smart speakers. Yu is quoted as saying that if and when Huawei can no longer access Google’s Android ecosystem, it can deploy Harmony OS “at any time.” Until then, Huawei will continue to support Android.

Google suspended Huawei’s Android licence in May after the US government added it to an ‘entity list’ of firms that US companies were banned from doing business with. Google lobbied the US government to allow it to continue working with Huawei, arguing that cutting ties could present a national security risk. Last month, the ban was temporarily lifted by President Trump but trade relations with China remain highly strained. The

Trump administration has raised concerns that Huawei uses its technology to spy for the state – something Huawei has vociferously denied.

A statement explained, “With HarmonyOS, app developers won’t have to deal with the underlying technology for distributed apps, allowing them to focus on their own individual service logic. Developing distributed apps will be easier than ever before. Apps built on HarmonyOS can run on different devices while delivering a seamless, collaborative experience across all scenarios.”

The company claims that the microkernel architecture builds in security and trustworthiness “from the ground up”. A microkernel is a minimalistic kernel designed to be as small as possible. It contains only the simple code needed to communicate with hardware and load an operating system, and provides only the most basic services like thread scheduling and inter-process communication (IPC).

Huawei will release HarmonyOS as an open-source platform, worldwide and will also establish an open-source foundation and an open-source community to support more in-depth collaboration with developers. The company says it will lay the foundations for HarmonyOS in the Chinese market, and then expand it further to the global ecosystem.

“With a focus on providing new and unique value, Huawei will open up and share its core capabilities in areas like connectivity, cameras, and AI. It will work closely with ecosystem partners to deliver apps and services that provide consumers with the best possible experience and bring new life to the industry,” a statement said.

“We believe HarmonyOS will revitalise the industry and enrich the ecosystem,” Yu commented. “Our goal is to bring people a truly engaging and diverse experience. We want to invite developers from around the world to join us as we build out this new ecosystem. Together, we will deliver an intelligent experience for consumers in all scenarios.”

Earlier this week, Huawei also revealed plans to ramp up R&D with a massive new centre in Shanghai’s Qingpu district. The $1.4 billion facility will focus on chips, wireless networks and the Internet of Things. The centre could employ between 30,000 and 40,000 Huawei employees, a company spokesman is quoted as saying.