More
HomeInsightsMWC 2013: NFC might not be dead in the water after all?
Insights 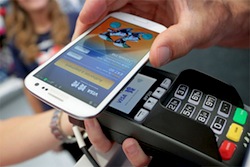 At Mobile World Congress 2013, Mobile Europe was given the opportunity to test out the GSMA NFC Experience.

Equipped with a Sony Xperia T smartphone that came preloaded with €15 of credit, we successfully used the phone to buy lunch at the NFC-enabled payment terminals.

The GSMA also set up access gates that authenticated access using the NFC badge, as well as a voucher and couponing application but other attendees reported that these services often didn’t work.

In our preview to MWC, we discussed why NFC is unlikely to take off as it’s considered to be too complicated, while banks and payment solution providers are already gaining huge revenues from m-payments without using NFC.

“We are now seeing players who want to offer mobile payment without NFC, like PayPal,” said Fred Huet, managing partner at Greenwich Consulting.

“In developing countries, m-payments are increasingly popular and don’t rely on NFC, proof that such solutions can succeed and do have a place in the mobile payments space.”

But The GSMA has a clear agenda involving NFC and was forced to admit that the technology is not quite there yet.

“We all know this is a complex process and a wide and challenging ecosystem. Mobile NFC is merging with and bringing together a wide range of industries creating the potential for a new wave of innovation,” Paul Crutchley, Market Development Director at GSMA, told Mobile Europe.

“To enable an interoperable ecosystem across mobile network operators and industry services takes time to get right. However great progress has been made and we are starting to see live launches and trials implemented across the globe.”

Ten years in the making

Global semiconductor company NXP helped to co-invent NFC in 2002, together with Sony.

“It took some years to standardise and mature the technology, but now we are very proud to see OEMs, MNO and service providers across the globe adopting our technology,” Jeff Miles, vice president and general manager, mobile transactions product line, NXP Semiconductors told Mobile Europe.

“Nine out of the 10 major smartphone makers are integrating NFC… and there is now a critical mass of devices for application developers to create services for consumers.”

According to Informa senior analyst Guillermo Escofet, Samsung is flexing its muscles now that it has grown into the biggest smartphone maker in the world.

“Samsung has been embedding its NFC phones with secure elements very quietly so as not to ruffle the feathers of the mobile operators, but now that it is the biggest handset maker in the world, this has emboldened Samsung to strike out on its own in the payments market,” he said.

“Handset makers have been hedging their bets. They’ve been wiring their phones to support SIM-based payments, which is what the operators want as they have control over the SIM card, but at the same time they’ve also been embedding their own secure elements into the phone, which essentially can do the same thing, authenticate payments, but that would be controlled by the handset maker or OS maker.”

Mastercard is also very active, signing partnerships with Orange in Spain, Telefónica in Brazil and Turkcell in Turkey.

But John Devlin, Practice Director at ABI Research, thinks that the new partnership between Visa and Samsung is a game changer.

“[Operators’] approach to date has been quite self-centred and built on the assumption that people will pay them to deliver NFC without a lot of any real consideration, until last year, of how they might expand beyond payments,” he told Mobile Europe.

“The business models envisioned were all wrong and the operators did not account for the fact that they had to really sell their ‘wallets’ to partners and customers alike, as well as consumers.

“Increasingly I have seen the operators’ financial partners being frustrated with the slow progress being made and the unfriendly terms being offered.  Effectively Samsung and Visa have now taken grasp of the matter and are telling the operators to change their approach, to be more flexible, or miss out altogether.”

However, Escofet warns that for all its muscle, Samsung will not be able to prevent operators from blocking its payment services, especially if operators are heavily subsidising their handsets and acting as their main distribution channel to consumers.

“I heard at MWC that there is now talk that some operators would like to wrest control of the securely embedded element away from Samsung. They might even demand Samsung hand over control of the securely embedded element to them, because in some cases, some operators might not want the extra cost of having to contract companies to deploy special NFC SIM cards and Trusted Service Manager capability,” he said.

The future of NFC

NFC mobile payment services are already up and running in Japan, Korea and the Czech Republic, yet none of the operators in these regions have announced that NFC is a unqualified success.

“NTT DoCoMo started doing this in 2004, with a majority of the Japanese feature phones distributed by DoCoMo being NFC-enabled,” said Escofet.

“In terms of people using the service on the phone to make payments, the uptake has been quite low. Even on public transport, the uptake hasn’t been that significant, it’s been kind of disappointing.”

Devlin feels that some operators are showing potential in the NFC space, but have been “hamstrung” by lack of ambition, lack of investment and poor communication, marketing and strategy to their service partners and consumers.

“Turkcell is a good example of how to move things forward, with its wallet and services.  It went out and recruited smartphone OEMs to build tailored handsets for the service and it worked with the card networks to enable this,” said Devlin.

“The efforts in France with Cityzi have been commendable for building a wider network of companies in the ecosystem, but Quicktap from Orange in the UK was for me a lesson in how not to launch a new service, especially one based around a ‘cool’ new technology.”

Is NFC dead in the water?

Despite the many challenges to NFC uptake, everyone seems to agree that NFC will definitely arrive.

“Operators are determined to roll it out and so are the handset makers. A lot of the point-of-sale terminal manufacturers like Verisign and Eugenico are heavily behind it now and NFC is now a standard for their terminals,” said Escofet.

“There’s a lot of market momentum behind it, but it’s still going to take a long time before it becomes a mass-market proposition.”