NSN to make series of major product and service announcements 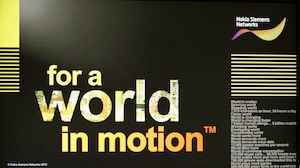 Networks, CEM and Services all get enhancements

Mobile Europe can reveal that the launch schedule, and there are likely to be more details on the given launch dates, looks like this:

NSN will announce support for the APT700 MHz LTE band plan, known as Band 28, the recently standardised LTE band that will be most widely adopted in Asia, but has also been selected in Mexico. The product will be a six pipe product, allowing 2+2+2 MIMO

The vendor will also announce support for LTE load balancing on its single RAN products, enabling operators to balance traffic load between different LTE frequency bands – for instance where an operator has LTE in both 800MHz and 1800MHz spectrum bands. Load balancing is part of the 3GPP R10 specifications, commonly called LTE-A.

There will also be an announcement that NSN expects to have carrier aggregation capability (another R10/LTE-A specification) enabled on its LTE equipment by 2013. It says this is in line with expected availability of devices with support for carrier aggregation.

The company will be announcing a network planning software analytics package, designed to help operators more accurately target network investment. The package is designed to show where an operator can benefit from macro expansion such as increase sectorisation or adding carriers, and when a small cell or WiFi solution might be the best fit. NSN said that work with one operaor had already shown the operator could save 20% on network investment than if it had undertaken planning without NSN’s analytics in place.

NSN will also launch a second generation residential femtocell, which it says will operate at 5W output power*, supporting 8 simultaneous users. The unit will support iUH – the standardised femtocell interface for connectivity to the core.

NSN will be adding to Continuous Packet Connectivity (an HSPA/R7 technology) support by making multi-band load balancing available to its WCDMA base stations. With both technologies active, NSN said operators could see a lift to uplink performance of up to 4x. Load balancing between UMTS900 and 2.1GHz could bring about a 20% capacity increase, the vendor said. The 3G network enhancements could represent a 30% cost saving on achieving a similar network benefit through adding base stations or extra carriers, the vendor said.

On the 4th October, NSN will hold a webinar titled “LiquidNet, Get the Max from your network” to outline these enhancements (see below for links).

A week later, NSN’s attention will switch to CEM.

A customer quality insight pack will allow operators to monitor its networks by asessing impact on its customers, mapped onto internet-based maps to see exactly where issues are arising, and what the revenue and subscriber impact of those issues are.

A second pack, CEM Index, is a tool NSN will offer to allow operators to poll users to gain direct insight from subscribers as to whether they were happy with their service, or recent session. This poll could be initiated through a customer care app, or SMS, and is designed to enable operators to correlate user perception with their network and service KPIs and KQIs.

The third pack is called Customer Care Insight, an automated customer care package that will deliver user-related information to care operatives based on network and device information, so that they can take the necessary action to deal with customers.

10 October Service Operations and Management Solution
Allied to the CEM announcements is a new launch in NSN’s Service & Operations Management. NSN’s Network Operations Centres, currently providing network management on a managed service basis to operators representing 250 million subscribers, will start managing at the service, as well as the network layer. That will mean NSN managed services designing and modelling services, service configuration and activation, and managing service quality. NSN claims it will be the only managed service provider offering this layer of service management, bringing together network IT with OSS and network level data.

The CEM announcements will be support with a webinar on 11 October, called CEM: Focus on what matters most.

30 October: the vision thing
At the end of the month, NSN will wrap up its network and CEM capabilities with the launch of its CEM for Liquid Net concept. Ken Wirth, its new head of customer operations in the US, will announce to 4G World in Chicago the concept that integrates NSN’s CEM software with LiquidNet radio and core elements with its professional services capabilities. The aim is to produce a single view of the operators’ business to enable more efficient investment, improved customer experience and an improved bottom line.

Following Wirth’s announcement, NSN will hold a webinar on 31 October titles, CEM for LiquidNet: Optimise for all the right reasons.

So what does it all mean? Well, the radio announcements are in line with standards releases – adding elements of co-ordination and added capacity to 3G and 4G networks. The Het Net design and planning launch is a recognition of the fact that small cells are hardly about the small cells, but about knowing where and when to deploy, site acquisition, backhaul, targeting capacity and so on. The WCDMA enhancements are about doing more with what operators have – maxmising existing investments and spectrum. This is standard, if advanced, stuff – and fits well into NSN’s LiquidRadio concept.

The CEM and services launches are perhaps more interesting, strategically. Here we can see NSN move to marry its position as guardian of the network data  with the customer and service data that has traditionally resided in the IT side of operators’ businesses. It says its capabilities are unique, and its service management as a service capability is new to the industry.

It won’t like it being pointed out, but its CEM software packages bear a similarity, at least in positioning, to Alcatel Lucent’s Motive packages, even to the extent of sharing a name in one case — “Customer Insight”. It also might reject the notion that Ericsson, especially through its new OSS-BSS unit formed around its Telcordia OSS acquisition, would be able to mirror much of NSN’s capabilities through its own sizeable managed services business. But it’s hard to see Ericsson not also moving “up the layers” in its managed service business.

The thrust is clear, though, tieing together the CEM and network sides of the business to provide more co-ordinated network planning and operations, and customer experience management that can take advantage of the network context. Even further out, perhaps at MWC2013, expect to see something that moves to take much of this subscriber-based network co-ordination and automate it. NSN launched SON for core at MWC2012 – what bets on a cross-network LiquidSON launch next time around, tying together the CEM for LiquidNet vision?

* This is a mistake, See first comment below. A residential femtocell would not have 5W output power. 5W refers to the unit’s power consumption. (Editor)