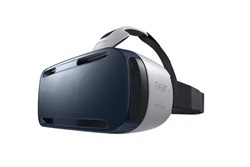 Samsung has ventured into the world of virtual reality, unveiling its first headset amid a busy range of announcements at the annual IFA show in Germany.

The phablet plugs into the headset via a microUSB connection. The Note 4 is wireless, unlike Oculus's own Rift headset, and has a 5.7 inch quad-HD Super Amoled screen. Users are able to navigate by using a touch pad, back button and volume key on the headset.

The headset will be launched later this year as an "Innovator Edition" and will initially be targeted at early adopters.

JK Shin, President and CEO of IT & Mobile Communications Division at Samsung Electronics, said: "The Samsung Gear VR goes far beyond expectations of how mobile technology can be used to consume content, and is a powerful representation of the progressive innovation of the Gear series. We are pleased to have partnered with Oculus VR to bring this incredibly immersive mobile content experience to consumers.”

Along with announcing the Note 4, which also features an improved fingerprint scanner and UV sensor and is Samsung's first metal handset, the manufacturer also revealed the Galaxy Note Edge.

This phablet device has a curved screen that allows users to access most used apps and receive alerts without disturbing what is on the wider screen.

The product announcements, which follow last week's reveal of a new Gear S smartwatch, come ahead of Apple announcing the new iPhone next Tuesday.

Ben Wood, Chief of Research at CCS Insight, commented: “Samsung needs the Galaxy Note 4 to be a hit. It has to make up some of the ground it lost as a result of the relatively poor reception to the all-plastic Galaxy S5 when it was launched in February. Samsung will be hoping the new metal based “Alpha” design language delivers a premium package in the eyes of consumers and does enough to be competitive against Apple’s much anticipated iPhone 6.

“The age of the phablet is effectively over. Most flagship smartphones now have screens of five inches or more. We’ve come a long way since Samsung announced its first Note device in Berlin three years ago (2011) when its size was greeted with incredulity.”

Sony also launched a new range of its Xperia smartphones, which feature the ability to play Playstation 4 games by plugging the device into a specially built controller socket.

CCS's Wood added: "Sony will be hoping [Remote Play] will provide a hook for PS4 owners to choose a Sony smartphone versus a rival device from the likes of Apple and Samsung. Sony’s decision to use Android Wear for its new smartwatch is a good move as it is quickly emerging as the defacto software platform for smartwatches beyond whatever Apple eventually announces.

“Sony has no room for complacency. A year ago it was the leader in smartwatches having announced its first product back in 2006. Samsung’s rapid development cycles have subsequently seen it announce more smartwatches in 12 months than Sony has in eight years.”

It also updated its software with the release of Denim, which has speeded up how long it takes to start the camera app. Other features include 4K video recording and the ability to take better quality images in low light.