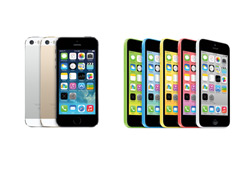 Apple has launched the highly anticipated iPhone 5S and 5C devices that feature a new OS, 64-bit architecture, high-end camera and fingerprint scanning technology.
Besides introducing a brand new mobile OS with iOS7, the iPhone 5S comes with the new A7 mobile processor that is essentially as powerful as a desktop computer, making it the first ever 64-bit smartphone in the world.
“The A7 is a 64-bit desktop class architecture, with a modern ARM instruction set that’s more efficient, 2x general-purpose registers, 2x floating-point registers, over 1 billion transistors and in the same die size as the A6,” Apple’s vice president of marketing Phil Schiller said at the press conference in California.
The new handset also includes the M7 chip, a Motion coprocessor that is able to take advantage of the phone sensors and continually process data coming from the accelerometer, gyroscope and compass without needing to access the main A7 processor.
“Moving to a 64-bit architecture means Apple can genuinely claim to have brought something new to the smartphone party,” said Ovum’s principal device analyst Tony Cripps.
“It should certainly help the company further cement its lead as a mobile gaming platform and will give the Android fraternity something to think about in a space whose significance is sometimes downplayed beyond the gaming world.” 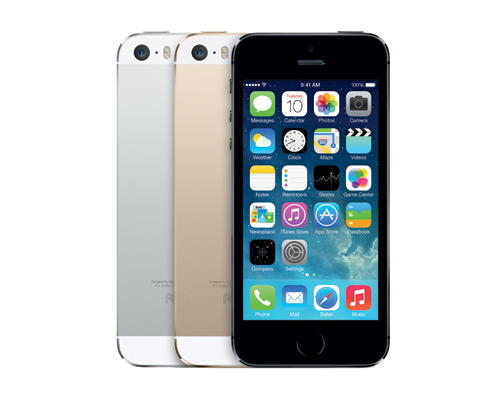 The iPhone 5S with Touch ID fingerprint scanning in the button
There is also a new five-element camera lens with a larger f/2.2 aperture, auto-image stabilisation and the pixels on the sensor now pick up 1.5 microns in size, which is bigger than the iPhone 5.
Most interesting is the introduction of the Touch ID fingerprint scanning sensor that has been added to the iPhone button, which features a 500ppi resolution able to scan sub-epidermal layers and detect the user’s fingerprint, no matter the orientation.
“By adding the fingerprint scanner, Apple is changing the biometrics industry. This technology has been used for a long time but mostly not used by consumers. Consumers would easily understand this technology and see value in it, [while] for the biometrics industry, this is like winning the lottery as it will lead to other [device] vendors following suit in the next few quarters,” IDC Research Director Francisco Jeronimo told Mobile Europe. “This is about bringing security to the device. Most users don’t bother to put the pin code as it’s annoying.”
But Consult Hyperion’s Dave Birch warned: “Will TouchID make iPhones magically invulnerable and capable of storing your deepest thoughts perpetually and in complete secrecy? No. Biometrics in the mass market are about convenience, not security.”
Apple has decided to retire the iPhone 5 instead of allowing the price of the handset to decrease, instead launching the iPhone 5C, a cheaper version of the iPhone that, apart from the glass screen, is made of hard-coated plastic. 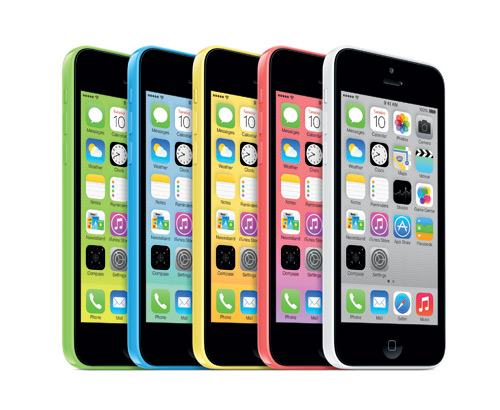 The new iPhone 5C in hard-coated plastic, aimed at mid-range markets
The iPhone 5C will support up to 13 LTE wireless bands, and both of the new handsets will support 2100 MHz, 1900 MHz, 1800 MHz, 850 MHz, 2600 MHz, 900 MHz and 800 MHz, which will potentially ease the headaches that have faced European operators.
By contrast, the iPhone 5 only worked on 1800 MHz, 2100 MHZ and 850 MHz.
The iPhone 5C, which comes in five colours, was rumoured to be Apple’s entry into the feature phone market, but instead the device is only slightly cheaper than the high-end iPhone 5S.
Conspicuously there was no mention by Apple about NFC and mobile payments, but Jeronimo feels that the new A7 processor will help Apple to move into the enterprise space.
“The 64-bit processor will be a quite important thing for developers looking to develop new applications. This will bring the smartphone to a completely different level and will make it side by side with the processing power and capability of a laptop, giving Apple a much better position in competing in the enterprise space,” he said.
“Apple will have to integrate sandboxing at some time in the future to increase security, but I don’t see it as something that is vital for them to succeed in the corporate market, since currently users are defining the consumerisation of IT and deciding what devices to use.”
Share
Facebook
Twitter
Linkedin
Pinterest
WhatsApp
Previous articleDeutsche Telekom’s SiMKo 3 handset features world’s first secure OS kernel
Next articleTelefónica Germany picks Oracle for VoLTE, RCS-e services platform